The German original of these lines has emblazoned the wall of a former warehouse at Berlin’s Uferhallen since 2019. Lois Weinberger titled this textual work “Eigenbedarf,” or “Personal Need,” a term used in real estate when owners claim to require use of a rented property.

When he died utterly unexpectedly in April 2020 in the midst of the biopolitical crisis, he was extolled in obituaries all around the world as one of the true greats of contemporary art. There is little to add to all the achievements that were remembered: he was an early and visionary critic of the disruptions of the Anthropocene, the mad drive to domesticate, subject, and order that has been typical of secular modernism and the division of man and nature that modernity introduced. In all his works, he commented on this gesture of domination and its conceptual and spatial figures and creatively worked against them. From the early black and white photo series shot behind his parent’s Tyrolean farmyard in Nichts ist von einer Handlung zu sehen (1982) with apparently documentary shots of the vegetal that were actually preceded by an intervention, such as the rearrangement of a branch lying on the floor, to the famous works at documenta X and 14, the disused train track wildly overgrown with plants from the Balkans as a metaphor against enemies of migration and the furrow in the Baroque gardens of Karlsaue that was surrendered to the outlaws and persecuted cosmopolitans of the plant world, ruderal weeds and their seeds—to ultimately, now sewn by guerilla gardeners with supposedly resistant gestures of wild seed-ball throwing, be turned into a cottage garden idyll—to the Corten steel mesh cubes used again and again, for example at the Venice Biennial, in which all was given protection and garden soil that arrived there as seeds or the detritus of civilization.

Lois Weinberger was one of the pioneers of a different artistic ecology, perhaps on a par with Stefan Bertalan, Jef Geys or Joseph Beuys. But his oeuvre always also had a psychosocial dimension, inscribed in an often interrupted, repressed tradition that runs parallel to a modernity shaped by instrumental reason: psychological alterity, drugs, delirium, deviancy, insubordination, bricolage, beatniks, voodoo masters, shamans, totems, indigenous art, and art brut. As an imperium of indirect references to the obstinate, untamable, and the inventing of counterworlds, this tradition stands immaterially alongside the formal world of his sculpture, which was often given short shrift in the eulogies to the artist in contrast to the political beacon represented by his plantings, weed gardens, and enclosures filled with wild growth. For Lois Weinberger also worked here in a sculptural way, dialectically engaging with the tradition of the avant-garde. He consciously reversed the figures of land art, using the vocabulary of minimalist abstraction to turn it against itself and to comment upon it. Repeatedly, he also used anthropomorphic figurations, as he did just recently with the soil figures in the series Basics – Die Idee einer Ausdehnung (Basics: The Idea of an Extension, 2018) or in Botanica (2013), scarecrow-like, mask grimaces placed on bodies of branches, or in Bischof (Bishop, 2003–19), where the head is a root, his ornate a cloth printed with Islamic ornamentation and his mouth is covered with nothing else but a respiratory mask.

Weinberger also used the methods of colonialist land grabs during the modern age — cartography and collecting natural specimens — and transformed them to countermodels: mappings covered in the names of vegetation (for example, Field Works from 2010) provided directions to reach empty lots and unused surfaces, the fissures in urban space. Laconic, poetic commentary on meandering murals captured the contradiction between the ordered and cultivated landscapes that are colonially economified for agrarian use or cleaned and/or monitored for tourism purposes and what grows unobserved, subversively or endemically at the margins, in the joints or remaining areas. In a vitrine collection with the excrement of animals from his “countergarden” in Gars am Kamp, he also painstakingly documented the trash left behind that was not digested, a piece of plastic, a snippet of newspaper. All of these fields in Weinberger’s oeuvre are embedded in a poetology, in the spirit of political early romanticism, alternative culture, and anarchism. And many works are accompanied by text, or rather, are themselves texts, often with references to concrete literature, such as the lists of plant names in which suffixes like -wurz (from Wurzel, or “root”), -kraut, or –blume (“flower”) are marked by hand, fixing them in their life form and thus making them proper names, the names of subjects. Indeed, the subject of Lois Weinberg the poet deserves a treatment all its own.

Now that this obstinate, unruly, precise, free artist who would repeatedly reveal the repulsive with a brief play on words, this wonderful man has outrageously died, one of his texts reads like a life description:

“the venation of a leaf
the emergence of a city.
aerial.          arteries.
closed circulatory systems. /
arterial structure of a dragonfly wing
crystalline fragments
of a dried-out loam depression
poppy      i remember
having gone down
such streets
without time
and period
it was more
than everything
real”. 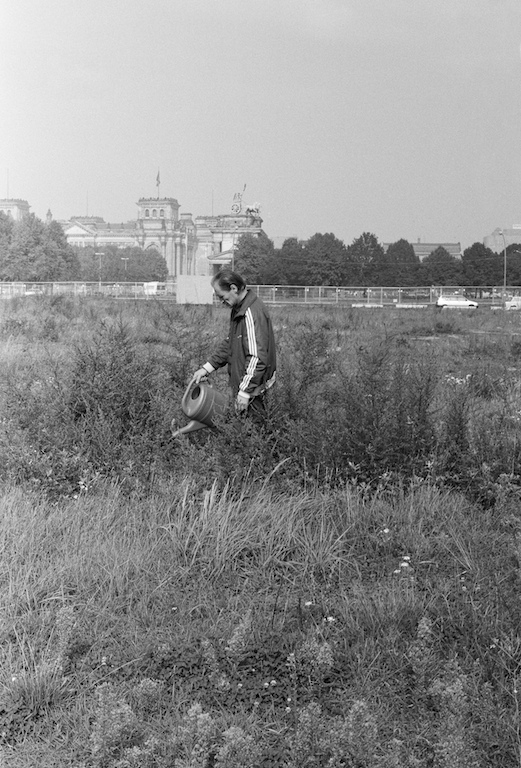